Do you want to know how to remove door handle with lock? This article will take you through that. Removing a door handle with a lock is a step-by-step process that anyone can easily carry out without difficulties. This process requires the right, efficient tools and instructions clearly followed for it to be completed efficiently. There are various types of door locks, such as knob door locks, cylinder door locks, and mortise locks. This article will critically outline the steps to be carried out in efficiently removing door handles with a different type of locks. 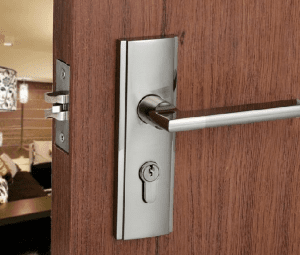 Removing a door handle with a knob door lock

The person must follow four steps to remove the door handle with such a lock. The first step includes removing the screws using the Philips head screwdriver and screwing the visible screws, which are normally two. The second step is removing the doorknobs. The exterior and interior knobs are easily removed. The third step is unscrewing the face plate, which has two screws, using a Philips head screwdriver. Lastly, the latch is removed by simply grabbing the latch and pulling it out easily.

Removing a door handle with a cylinder lock

The first step is removing the screws visible from the door’s interior by using a Philips screwdriver. These screws hold the door and lock together. After the screws are removed, the spindle is removed. The lock’s spindle is turned using a flathead screwdriver in an anti-clockwise direction until it stops. After the spindle stops turning, find the square tab within the spindle. Use the flash head screwdriver to push the tab holding the spindle into its place, and it will pop out. Finally, take the cylinder out. Since the spindle has been removed, you can access the lock’s housing, so by carefully looking inside the housing, you will locate a small tab that releases the cylinder. Using the Allen wrench, push the cylinder till it pops out or slides.

The steps followed are:

Conclusively, the steps of removing a door handle with various types of lock, such as knob door lock, cylinder door lock, and mortise lock, are essential to any homeowner.

How To Remove Door Handle With Lock

How To Install A Door Handle With Lock

How To Remove Door Handle With Lock

How To Install A Door Handle With Lock