Tubular locks are hard to open without their keys. By using the right method and tubular lock pick tools, though, you’ll be able to pop them. There may be situations where you need to force a tubular lock open.

For instance, when you accidentally drop keys to your bike lock, lose keys to your Kensington security slot, or need to bypass elevator access control in an emergency. Here’s how you can play the hacking trick. 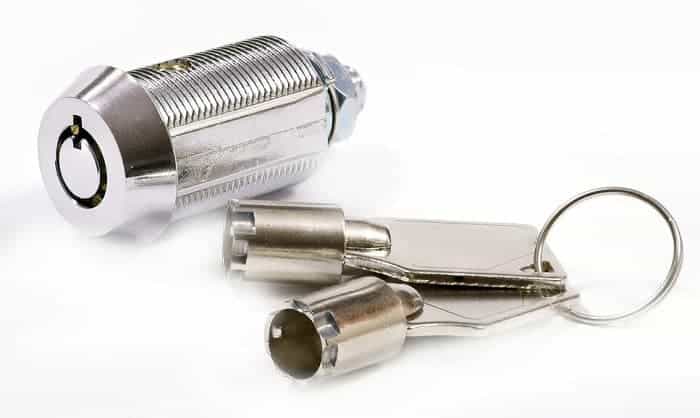 Before picking a tubular lock, you should make sure that you have an effective technique. So, you’ll want to test your method first using practice locks. Practice locks give you a clear picture of what’s inside the lock to make picking easier.

If you want to unlock a particular item and don’t really care about method, you can skip buying a practice lock.

2. Check how many pins the lock has

Tubular locks usually pack between 6 and 8 pins, most of the time you’ll find them having 7 to 8. The number of lock pins determines the type of pick required to open the lock. For example, if you want to pop a lock with 8 pins, you should use a pick with 8 needles. Count and note the number so that you don’t use the wrong pick.

Make sure that your lock is free of dirt before picking it. Wash it with soap and warm water to get rid of dust or debris. For a rusty lock, try to clean it as much as you can. A clean lock ensures an easier picking process.

4. Move the pick’s needles back and forth

Picking needles should switch without problem as they’ll need to contour properly to the lock’s interior. If they’re difficult to move back and forth, they may be rusty or dirty, and thus are not helpful for picking.

Remove visible dirt and rust from your pick so that the needles can switch easily. If they’re still difficult to move even after cleaning, then it’s possible that your pick is out of order.

5. Buy a good lock pick for a successful unlock

Since tubular locks have a complicated design, they’re not as easy as other locks to manipulate. The only proven and most effective way to open them without a key is by using a lock pick. So if you’re serious about picking a tubular lock, it’s always a good idea to invest in a pick.

6. Twist the pick’s tightening bolt to the left

Now to start opening the lock, twist the tightening bolt on the side of the pick to loosen it. Line the pick up with the lock to align its needles with the pins inside the lock. Then tighten the bolt again after you’re sure the needles and pins are aligned.

7. Insert the pick into the lock

Insert the pick into the lock as deep as it will go. If the lock is stuck, pull out the pick and twist its bolt to loosen it again. Try to re-adjust the needles until they slide easily into the lock.

8. Turn the pick to the right

Twist the pick to the right. With proper needle adjustment, you’ll be able to press against a spring and open the lock. If you still can’t do it, re-adjust the tightening bolt and try again.

Use a ballpoint pen whose exterior has the same diameter as or a bit smaller than the opening of your lock. Use a scissor to cut off the end of the ballpoint pen. Take the ink tube out of the pen, because you’ll need the pen’s exterior to force the lock open.

Make four notches on the pen’s side. These notches should run up and along the sides of the pen. They’ll give the pen more flexibility when it slides into the lock.

3. Slide the pen into the lock

Insert the pen into the lock’s entrance; make it go as deep as possible into the lock. If the pen can’t slide in, make longer notches or remove any possible rust or dirt inside the lock.

4. Shake until the lock opens

Hold the lock in one hand and the pen in the other. Shake both continuously from side to side so that the pins come loose. Keep shaking until the pen hits all of the pins and open the lock.

There’s no guarantee that the ballpoint technique will work, because – as we’ve said before – it’s a lock pick that does the best trick. However, if you manage to open your lock with a pen, then it’s your lucky day.

Best Tips On How To Pick A Drawer Lock

Best Tips On How To Pick A Drawer Lock